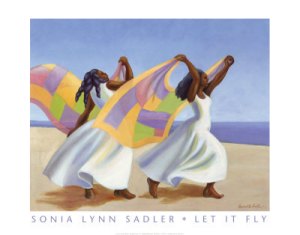 The heat is so overpowering I could cut it with a knife…no, I think I would need a sword…Each movement I make feels like I m attempting to move the earth…and an unknown counter force seems to be resisting my every feeble attempt.

I am languishing like a lazy lizard…and the bean bag into which I have dug myself is covered in a layer of sweat outlining my body underneath…I feel the little droplets of perspiration trickling one after the other from my neck & down my back and into nothingness- spreading a patch of wet where it gets squashed..

Up above, there are pregnant clouds looming over me…wait… they are moving away ! …they seem to be mocking me…

I see a blue lake beckoning to me, into its calm cool interior… & I jump into the ice cold water! The cold permeates my being & I become one with it…..ecstatic in attaining freedom at last from the gripping shackles of the heat monster !

I m stuck to the bean bag.

Has the heat addled my mind?

The voice jerked me out of my reverie & I realised it was the Lift Man.I responded back with a nod & a Good Morning. “Aap kahan pe kaam karti hai?”, he asked again. Now I started to feel irritated. Why can’t he just do his job instead of asking unnecessary questions which are none of his business anyway? With a hint of annoyance I answered back “Vodafone” and averted my glance so that our eyes would not meet.Thank fully, the lift went down just then & I was saved from further inquisitve questions from the man.

How many such nameless, faceless people are continuously, soundlessly working so that our lives may be easier? Door men…Watchmen…Garbage pickers…Parking lot attendants….Cleaning ladies….House Keeping staff…and their eficiency lies in their carrying out their job without people like me registering their presence….after all, how many times have I actually looked the Doorman in the eye & acknowledged him when he says “Thank you ma’am”?

“Good Morning Madam !” . It was the same Lift man again, but a new day and a fresh perspective. I looked him in the eye, smiled & said : “Good Morning”

makes you feel a bit lonely isnt it…. imagine this… a silence punctuated by falling snow… a darkness highlighted by an inky sky, and a music distanced by a touch of melonchaly…

As Salman Rushdie would say… its a moody lake… lake Michigan. It smiles in the Sun and weeps in the rain… and contemplates amongst swirling waves on a windy day. I see the lake every day as I walk down to work. Reminds me of a lot of other constants in my life… like love and affection, and books and dreams.

I have been here at Milwaukee for a month now… battling snow storms and clients difficult to pursuade… and yeah, food at Indian restaurants designed to kill any existing vestige of affection you

may have for authentic desi food !

Did you read the post down below? She talks about her birthday there, the one on which i gifted her a

pair of coral studs. Corny as it sounds, there is a story behind that…

it was in March, and I was joing my family for a trip to Goa. I was fresh out of placements and was

feeling good about my life. I had met the girl I wanted to be with for the rest of my life and she too

felt the same way. Now the only thing remaining was to tell my meat eating, beer swilling hard core

usually does not drink anything stronger than buttermilk !

My family, then, it comprised of my father, my elder brother and my bhabhi. I told them, all of them, and they were all quite ok with it.

to teasing me about her all the while. My brother and my dad being the men they are, chose to not talk about the subject at all.

It was crazy…. neither me or her, had any free money, the status of college students with jobs beginning  3 months down the line isn’t really different than a regular broke student pilfering favours

off his family and friends. We could not afford to talk to each other on the cellphone all the time.

SMS was the only way out… it was cheap, and un-intrusive. Or so we thought. I had never sent so many SMSes to anyone in my entire life, I described Goa and whatever we did on the cellphone, typing one silly message after the other.

notion of romance, but then, thats what it is all about isnt it.

We stayed at the Baga beach, my first trip to the place, and a place that we have visited again and

again since then. I wanted to buy a gift for her, and my bhabhi just wanted to take a walk, so the two

of us went on a long walk along the Baga beach. She helped me pick out something which would be just right, a pair of coral ear studs. And obviously, since i did not have the money to pay for it myself,

she bought it as a gift for both of us. Thats how, even the first real gift I bought for her, was not

really paid by me…

Funny isn’t it, that the things you have not paid for, may turn out to be the ones dearest to the

The end of exams, & the promise of long days of fun..

You won’t hear me complaining about the sun

End of exams, beginning of holidays

Board games, made up games, badminton, & truant play

Driving mom crazy till she gets vexed

Summer is my Birthday!

Lending Libraries & visits to the bookshop

Reading every second of the day

That I am not playing, or sleeping or eating!

Summer is that visit to my hometown!

Summer is work, work & no respite

How perspective changes when you grow up….Which is why I still like to associate summer with the colours & feelings when I was young…& carefree!

I do love summer !

My birthday is just around the corner again. I am turning a really grey-with- strands-of-white twenty seven ….I have just come back after finally hitching a tailor to stitch my blouse since I have promised to wear a saree on the DDay…And I cant help thinking, why do we make such a fuss out of it? ( not that I don’t love it! )

In my school days I remember it was the one day when people used to wear a civil dress to school & bring toffees for everyone. The teacher would call the particular kid to the front of the class & we would all sing a noisy “Happy Bday to U” . I, somehow always bunked school on my birthdays because the very routine mentioned above that made people wait for this day used to scare me to bits ! I always used to take toffees on the next day for my close friends though…The only time I did go to school was in the 11th ( by when thankfully u were too old to really go to school in a color dress 🙂 ) and my friends gave me a good scare with an unknown gift from a mystery guy !

My most special birthday would be the one in which he & I met the first time in the capacity of ‘sweethearts” from being “friends” …We were back in college after a 3 month long hiatus & decided to go for a walk… he gave me a book – my birthday present. It was a very well worn ( & torn ) James Hadley Chase, an author whom my father denounced as ‘trashy” since the time I remember and therefore considered so all along by me…& I didn’t know what to say. I looked at him somewhat confused while at the same time rifling through the pages of the book, and, right in the middle in a carved out crevice, lying in a bed of cotton were the most beautiful pair of coral studs….My first gift from him & the one dearest to my heart. Since then he has bought me gold & diamonds & what not…but those- those were truly precious!

Well he is not here for my birthday (again) and well…I just thought a subtle message is in order… don’t u think? 🙂